Writing a short article about salmon is like fitting a camel through the eye of a needle. This is a start but really just that; an incredibly brief summary that just begins to touch the complexity of salmon life histories, and barely glimpses the effect that humans have on their success. That being said, an understanding of the basics is a key step in understanding the utter chaos that is salmon welfare.

Salmon play a monumental role in this region’s culture, economy, history, and ecology. Despite our love and dependence on this fish we are undeniably causing its gradual decline. There’s a lot of finger-pointing in the news and in our communities. It’s habitat loss! No, it’s overfishing! What about salmon farming, how does that come in to play? Climate change? Maybe it’s just natural? The simple answer is: there is no simple answer.

As Dr. Craig Stephen eloquently puts it, we’re fighting a war on salmon and we’re winning. We’re effectively crippling them in every aspect of their life history. It’s easy to play the blame game. If the cause were easy, then maybe fixing it would be too. Unfortunately, one of the most daunting aspects of saving salmon comes down to the fact that the salmon themselves are incredibly complex. So, before I get too political and depressing, here it is: an article about salmon from a biological standpoint for, in my humble perspective, the foundation of an educated option is knowing about the subject matter.

Salmon is a term used generally for multiple species of fish in the Salmonidae family. This group also includes trout, whitefish, grayling, and char. The salmon species originating from the Northwest of North America are all part of the genus Oncorhynchus and include Chinook (King, Spring, Smileys), Keta (Dog, Chum), Coho (Silver), Pink (Humpies) and Sockeye (Reds). Atlantic Salmon are a single species that is part of a different genus (Salmo salar).

Spawning occurs, generally speaking, in the late summer. The actual start varies between species, rivers, regions, and weather. These factors also affect the success of the spawning events. As salmon begin their migration up the streams and rivers their bodies undergo tremendous changes. Some species, like Coho and Sockeye, turn bright red. Pinks and Sockeye develop humps and the males of almost all species develop a characteristic hooked upper jaw called a “kype.”

The most dramatic change, however, is the drawing of energy from muscle tissue, fat storage, and even organs. That, paired with the fact that the salmon stop eating once they begin their migration, means that by the time they reach the spawning site they are essentially swimming sacs of reproductive material. As their organs are absorbed to make room for eggs and sperm, salmon also lose the functionality of their immune system. Thus, migrating salmon are also likely to contract a variety of bacterial and fungal infections and will lose massive chunks of skin and tissue on their way to the spawning grounds. In summary, a spawning salmon becomes a real-life zombie. Except their sole purpose in semi-life is reproduction, not eating brains, as far as we know.

The migration upstream can be, and usually is, a huge undertaking. To reach their final destination salmon must overcome currents, rapids, waterfalls, dams, predation by a huge variety of animals (including humans), exhaustion, and disease. Once the successful individuals reach the spawning site the salmon undergo their final act.

Female salmon begin the reproductive process by creating depressions in the gravel with their tails. These depressions are called “redds” and can hold thousands of eggs. Dominant males fertilize the eggs by releasing milt (fish sperm) over them and, once fertilized, the eggs are covered with a thin layer of gravel.

The adult salmon die shortly after spawning. This is quite possibly their most important act. Their bodies provide food and nutrition for organisms of all sizes – from bears and wolves, to microbes, to mosses and trees. In some cases, nitrogen from salmon carcasses is estimated to contribute roughly 25% of the total nitrogen source in the forests surrounding salmon streams and rivers (Helfield and Naiman, 2001). The nutrients from salmon spawning events allow for the incredible diversity and success of life in riparian zones (the areas where land and river meet) (Hocking and Reynolds, 2011).

As the winters comes to an end and the bodies of salmon parents have long since been eaten or decomposed, tiny salmon alevins, fry and smolts begin to emerge from the gravel. Salmon of different species develop and leave the gravel at different times, but all go through the same basic stages.

Alevins, or sac fry, are the first stage of salmon development after the egg. These tiny fishlings still have a visible yolk sac attached to their abdomen and rely on this sac as their main source of food. Once the yolk sac has been depleted and the young fish begin to catch food for themselves they are referred to as fry. Pink and chum salmon will swim almost immediately to the ocean and during this migration are referred to as smolts. Sockeye salmon tend to spend a year or two in lakes before heading out to sea, as do Coho. Chinook are somewhere in the middle, spending around six months in freshwater before transitioning to salt.

These, of course, are generalizations. Like seemingly all stages in a salmon’s life history, there are many exceptions to the rules and quite a lot of variability from region to region and from year to year. Salmon, in short, are important, fantastic, and wonderfully complicated. It is in our best interest to protect these species so that they, and the complex ecosystem surrounding them, can continue to thrive! 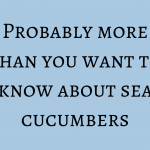 Probably More Than You Want to Know About Sea CucumbersUncategorised 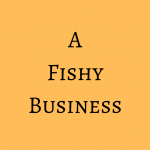