Something amazing is happening in the world of farming, and it’s happening somewhere unexpected – beneath the ocean surface. In a time when the health and future of the ocean is always on our minds, aquaculture, ocean farming, and ultimately our relationship with the ocean are being reimagined using a regenerative model. While the word “aquaculture” may not bring up beautiful thoughts of thriving underwater farms, a regenerative model might be able to change that. Can ocean aquaculture and farming bring us closer to a healthy ocean, provide nutritious food, create economic opportunity, and do good for the planet? Let me tell you about all that, and more.

Going to the shore and out to shallow coastal waters to harvest seaweed and shellfish has been a practice in coastal communities world wide for generations. Nutrient-rich seaweeds and shellfish are a staple in the diets of many people, including coastal indigenous peoples in BC, and they feed people year round. In recent years larger scale commercial seaweed farming has begun to make waves on the BC coast as the potential benefits are being realized. The cultivation and farming of seaweed and shellfish in small (one hectare), underwater farms offers a way to work with the ocean system to sustainably grow abundant, nutrient rich food while readily uptaking carbon and giving back to marine and terrestrial ecosystems.

Seaweeds (or sea vegetables) grow using only nutrient-rich ocean water and sunlight, unlike land crops that require many more resources such as fresh water, fertilizers, pesticides, new land and soil, and daily maintenance. Using just seawater and sunlight, seaweeds grow into some seriously nutritious and tasty food, containing an impressive array of vitamins and minerals that will leave your favourite health foods in the dust. If you enjoy sushi or our local Kelp Stout you are already enjoying the bounty of seaweeds! Seaweeds also have an incredible ability to grow quickly and will grow 30 to 60% faster than most land crops (with some species growing over 30 cm per day!). One hectare of seaweed farm can produce over 22,000 kg of sea vegetables and hundreds of thousands of shellfish in about 5 months. This rate of growth requires the uptake of huge amounts of carbon and nitrogen into seaweeds from the ocean water which is good news for the climate, the ocean, and us. Excess nutrients in the water from urban or agricultural runoff can have negative effects on ecosystems causing algae blooms, oxygen deprivation, and an unhealthy marine ecosystem. Annually, The ocean absorbs billions of tons of carbon from the atmosphere causing ocean acidification which has a whole host of negative effects on all types of marine life. Large-scale seaweed farming has the potential to uptake excess carbon and nutrients from the ocean and help restore ecosystems that have been affected by ocean acidification and runoff. Seaweeds can have terrestrial benefits as well by adding nutrients into soils. Nutrient-rich seaweeds can be mixed into compost and fertilizers to supplement soils for terrestrial farming, reducing or eliminating the need for petroleum-based fertilizers that dominate modern agriculture and ultimately run off into waterways.

Aquaculture is one of the fastest growing food industries in the world  that provides over half of global seafood. In theory, aquaculture is the most efficient and sustainable way to produce seafood, but in practice the industry is not always sustainable. Some methods of aquaculture can cause harm in nearby ecosystems when the health of the ocean system is not prioritized. Regenerative practices put ecosystems first and use methods that build resilience in ecosystems on land and in the ocean. In a regenerative model of seaweed farming, local species are used and grown in such a way that the ecosystem is supported by the farm. Seaweed canopies create habitat for marine life and act as breakwaters while shellfish grow below filtering seawater and increasing biodiversity. Diversity builds resilience in ecosystems and brings new foods to market, diversifying our plates and reducing pressure on over-harvested species. Locally, species such as Sugar Kelp (Saccharina), Winged Kelp (Alaria), Giant Kelp (Macrocystis) and Bull Kelp (Nereocystis) are some of the species being harvested. In most regenerative farms, some of the seaweeds are left out in the ocean to remain a part of the ecosystem and eventually sink to the bottom once they begin to naturally die off. The sinking process is important in the ocean as it brings nutrients to the bottom for many organisms to feed on and sequesters carbon on the seafloor as seaweed decays. Regenerative model seaweed farming works to form a partnership with the ocean that supports ocean life. All the while creating abundant sources of food and uplifting coastal economies.

The global seaweed farming industry is estimated to be worth more than $80 billion USD within the next 5 to 10 years. Seaweed farming in coastal communities presents an opportunity for building up economies and creating sustainable jobs within the ocean sector. There is a relatively low cost to enter the seaweed industry, meaning seaweed can support food sovereignty world wide as a nutritious, locally-grown food.

It is important to remember that not all aquaculture puts the ocean first. Some ocean farms focus more on yield than the ongoing health of the ecosystems on which they depend. However, seaweed farms around the world are increasingly following regenerative practices and helping to uplift people and the planet with their operations. Many of the current and new farms in BC are following a regenerative model and pushing for high standards within the industry. Vancouver Island based company, Cascadia Seaweeds, invited me to visit their operations in Barkley Sound to see first hand how seaweed farming can do good for people and the planet. They have big plans to bring regenerative seaweed to our plates and new economic opportunities to communities with many small farms throughout the coast. Cascadia has committed to leaving 10% of their yield in the ocean each season to remain as habitat, food for marine life, carbon storage, and to upkeep genetic diversity. They have partnered with Indigenous-owned Nuu-Chah-Nulth Seafood Ltd to operate their first farms and support the growth of seaweed farming in the region. When centred around traditional wisdom and regenerative practices, seaweed farming can be hugely positive for marine life, humans, the ocean, and the climate. So, it looks like it’s time to build up an appetite for sea vegetables! 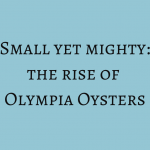 Small Yet Mighty: the Rise of Olympia OystersUncategorised 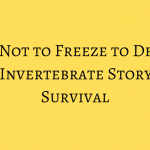 How Not to Freeze to Death — an Invertebrate Story of SurvivalUncategorised